As investors we like to think we’re acting rationally, even though there are mountains of evidence to show that, all too often, we’re not.

A successful day at the office — clinching a contract or hitting a sales target — can make us overconfident about our own finances. A bad day can have the opposite effect. Strongest of all is the well-documented herd instinct, which drives even hard-headed professional fund managers to move as a pack.

The latest snippet to cross my desk is research showing that our decisions can be influenced even by colour, specifically red. A study by the University of Kansas finds that financial information supplied in red tends to make people more pessimistic about the market than the same facts in black or blue.

Examining data from 1,451 individuals, assistant professor William Bazley, says he is “most surprised” by the results, which could have wide implications for everybody from savers reading financial statements to brokers flogging investments.

Of all the colours surveyed, only red produced a strong response. Other hues made no difference. Curiously, respondents in China were largely unaffected, perhaps because red is traditionally associated with good luck and not, as in the west, with danger. “In Western cultures, conditioning of red colour and experiences start in early schooling as students receive feedback regarding academic errors in red,” says Bazley. 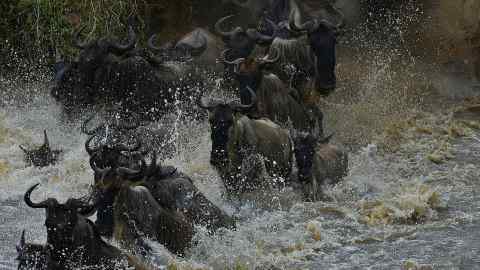 All this is of more than passing interest to retail investors at a time when we are receiving more financial information than ever, frequently in jazzy graphical form. What once had to be gleaned from black ink on newsprint now arrives on screen in glorious Technicolor.

The huge increase in the volume of data should in principle improve the information received by retail savers, compared with the days of print-only newspapers and broadcast television and radio. More information should be better, especially as the internet allows us to cross-check our facts as never before.

But does the way that deluge of data is presented on news websites, investment platforms and company pages help or hinder us? In particular, does it encourage non-rational responses or help us guard against them?

It’s clearly crucial to have enough time to digest all this information and master our emotional reactions. The red effect may be only one of many. We may also respond emotionally to everything from the font to the face of the person presenting the data.

Investment professionals, who are hardly immune themselves to emotional reactions, say that without an hour or two a day it’s hard for individual savers to stay on top of a typical stocks and bonds portfolio.

They argue that those who lack the time or the patience may be better off entrusting the nitty-gritty of investment to fund managers. Simon Crookall, founder of InvestEngine, a tech-based platform, says: “Many investors like the challenge and excitement they get from DIY investing, but it isn’t for everyone. Having a professional investment manager build and look after your portfolio can be a good way to control your investing emotions.”

Of course, this argument is self-serving. They’re drumming up business. But it doesn’t mean it’s wrong. At the very least, DIY savers need to have a clear view of their personal strengths and weaknesses as investors.

This point is especially relevant now, with stock prices high by historic standards. Buoyed by ultra-low interest rates, asset markets are very vulnerable to the slightest sign that central banks might cut back on the easy money flows of the last decade. The risks are highest in those sectors where prices have been set more by future prospects than current profits or dividends. In tech, above all.

We’ve just had a dramatic example of what can go wrong with the multibillion dollar implosion at Archegos, a (previously) little-known US-based family office run by veteran investor Bill Hwang, which ran into trouble after making big debt-financed bets on tech companies.

The collateral damage extends not only to the stocks that have been dumped, such as ViacomCBS (down more than 50 per cent since late March) but also the banks that lent to Archegos, including the sort of household names that retail investors might hold — Credit Suisse, for example. The Swiss bank is trading about 19 per cent lower than before the news broke.

It’s enough to give anybody a rush of blood to the head. But investors shouldn’t overreact. This shock is best seen as a reminder to remain cautious but rationally — and selectively — so. Janet Mui, an investment manager at Brewin Dolphin, sees the Archegos affair as “isolated . . . with a low risk of contagion”.

The consensus view is that with central banks and governments working together to support post-pandemic economic recovery and the US leading the charge, the outlook is good, particularly for the US

Certainly, the markets as a whole seem to have shrugged off the turmoil for now. The US S&P 500 index, the most important global barometer, is at all-time highs.

The Vix volatility index has fallen about 20 per cent this year, meaning that investors’ nerves are settling down after the rollercoaster of 2020, when the index soared as high as 65 in the March sell-off. At about 20 it’s still above pre-pandemic levels, but not by much, having averaged 15 in 2019.

Andrew Slimmon, of Morgan Stanley Investment Management, sees this as a buying opportunity. He argues that as 2020 recedes further into the past investors will calm down even more and put additional money into stocks.

The consensus view is that with central banks and governments working together to support post-pandemic economic recovery and the US leading the charge, the outlook is good, particularly for the US.

Tech stocks remain highly valued, having risen some 8 per cent this year as measured by the Nasdaq index. Despite a bit of buffeting, they are close to their February all-time high.

They could come under pressure again, especially if bond yields rise another notch or two following their recent surge, but — barring huge plunges — there is unlikely to be widespread damage as many investors seem well aware of the potential risk.

Meanwhile, canny savers can hop from growth stocks, like tech, to long under-appreciated value shares, which are ripe for a good run in the coming cyclical recovery.

Among the markets firmly in the sights of the value team is the UK, which is short on tech but long on cyclicals such as banks and utilities. As Alex Wright, a UK specialist fund manager at Fidelity, says: “There is a lot of risk in growth stocks but the UK isn’t a growth [stocks] market.”

That’s all very rational. But emotions too are involved. Many long-term backers of value stocks are now not just predicting their success but willing it on. Some have waited a long time for this moment, particularly in the UK, where equities have been in the doldrums since the Brexit referendum. They would hate to be proved wrong, And hate is an emotion not a rational argument.

Perhaps the suggestions should come — like all stock recommendations — with health warnings. In red.

A healthy diet and exercise can help to prevent...

How often should one engage in a health...

4 Summer superfood: Know about the many health benefits of...